Today our walk began thematically at parking lot x – leaning into Jeff VanderMeer’s Southern Reach trilogy. Venturing past the nature trail and bayou on the campus we moved towards the larger Escambia river that flows into Pesacola’s Escambia Bay. Ultimately we didn’t find foot access to the big river, but we did find our way to a larger, deeper part of the Conecuh (pronounced Cah-NECK-ah) river that feeds the bayou on the campus.

Following an unmarked, decommissioned road we came to a dock on a deep, slow-moving part of the Conecuh. It sported a rich wetland with grasses, watery ponds and an abundance of the chaotic forest style that is typical here. In addition to the deep stillness that typifies the bayou at this time of year, there was a low persistent thrum coming from the large smoke stack of the Gulf Power Crist Plant – a plant currently run on coal, that has been negatively affecting the ecosystem with its run-off. Maria made a few sound recordings, but the sound that was captured was overwhelmingly the deep bass sound emanating from the plant – making us wonder how deeply it affected the ecosystem as it runs day and night. In Jeff’s trilogy Area X manifests and captures land that transforms into pristine primordial nature with its ecosystem revitalized. Area x also has the power to transform humans. A bit of this magical thinking would go a long way here.

Entropy is evident in this place. Perhaps it’s less so during the growth season, but the bareness of the winter reveals primary strategies. Mushrooms and lichen colonizing their hosts. Plants that rely on each other to climb have created loops of intertwined branches that have unwittingly captured falling twigs. All of this forms unlikely assemblages that are beautiful chaos. This place is messy. Messier than Vancouver. Primed by the stillness and grey cast of the day, our minds were stopped by a saw palmetto shoot moving vigorously back and forth in the otherwise stolid forest floor. Nothing moves like that without some sort of very directed energy. We surmised that a creature was digging a tunnel and affecting its root system. The uncanny nature of the event (captured on video) woke us up — pure enchantment. We also came across a lonely champion twinkleberry tree. Apparently the biggest twinkleberry ever spotted. It was awarded this distinction in 1977. We don’t know if another has surpassed it. It certainly looks worse for wear and its trunk is being devoured by champion termites. The whole scene was desolate and abandoned. So strange to be labeled a champion and left to die on this unloved road. 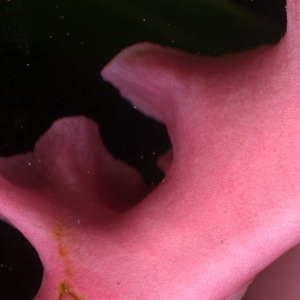 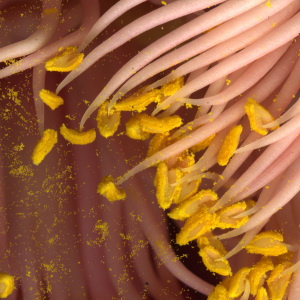 On our return walk to the campus we visited the camellia garden and returned to the studio with 10–15 varieties. We started a camellia scan based on a visual strategy we developed over three years ago for a begonia. The rounded corners, and squarish shapes seems just right for the over-the-top aliveness and attitude of the camellia.

We also received plant gifts from students in Robin Blyn’s class who dropped in during the afternoon. The ferns and shoots (including a swamp shoot!) they brought in will find their way onto tomorrow’s progressive scan. Carrie Fondor’s thoughtful New Genre class dropped in this evening and gave us some great feedback and inspiration for new directions to take the work. We heard about the Taj Mahal of Pensacola and also got some great tips about the Blackwater park. Some of the students may be joining us on our walk at 8am tomorrow!